In March 2015 Orbiton was contacted by the NPRA. After several cases of serious rockfall along county road fv.14, the NPRA wanted to identify the problem as quickly as possible. Geologists from the consulting firm Rambøll were appointed to coordinate the operation together with Orbiton.

Fv.14 at Berfjorden runs along a vertical, 150 meter high rock wall in an exposed area. Several stretches of the road are particularly known for unstable rock masses. Locals, regularly driving in these areas, could be in danger. Therefore the NPRA was in a hurry to obtain updated data on the stability of the rock walls.

Orbiton was commissioned to use one of their unmanned aircraft to film and photograph the rock wall. In addition to this, Orbiton proposed a different method also be adopted and introduced the NPRA and Rambøll to a new and very efficient solution.

The challenge of taking a large number of traditional images of a rock face, is that one quickly loses perspective of the whole. Individual images show a very limited area that is difficult to place with regards to the remaining area. Orbiton therefore proposed that in addition to mapping the rock wall along fv.14, several so-called “360-degree spheres” be generated.

The end result was presented interactively. This meant that geologists could “see” 360 degrees around them and “move” to several vantage points along the rock wall. Hundreds of images were put together, resulting in an image of very high resolution (about 30.000 pixels wide). This made it possible for geologists to use a particularly powerful zoom function, so that even the smallest details could be examined.

The unmanned system was programmed to automatically shoot a specified number of HD images from selected fixed points in the air along fv. 14., in order to capture the data necessary to generate the interactive 360-degree spheres. The images were then processed by a special software that customized and stitched over 5 000 data files.

The final result consisted of several 360-degree spheres assembled into one. This made it possible to have a complete overview or “situational awareness” for a distance of over 300 m. Very high resolution made it possible for geologists to zoom in and identify problem areas without losing track of where these areas were located on the cliffside. Having a complete overview of all the details of the rock wall also made it possible for geologists to plan climbing routes for further investigation and securing of the rock wall. 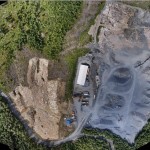 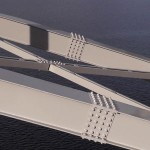